You are here: Home / Steventon Choral Society Sings For Sobell House In Its 60th Year

The first half of the concert featured a selection of well-known classics, including John Rutter’s “For the Beauty of the Earth” and Howard Goodall’s “The Lord is My Shepherd”. During the second half a selection of popular songs were performed, including some Gilbert and Sullivan pieces. The concert was well attended and raised £1059.58, plus a collection that raised £114, making a grand total of £1,153.58! During the last 23 years, the Choral Society has held 10 concerts in aid of Sobell House, raising thousands of pounds. Members from the society have also sung on three occasions at Lights of Love, our annual remembrance event in December.

Our ambassador, Jo Lennon was able to attend the concert and speak on our behalf, and also returned in January to a rehearsal of the society to be presented with a cheque. The Society said that, as they move into their 61st year, they were proud to lend their continued support to Sobell House, and to a charity whose vital work reaches so many people. We’re incredibly grateful to the Society for all of their efforts over the past decade and beyond. 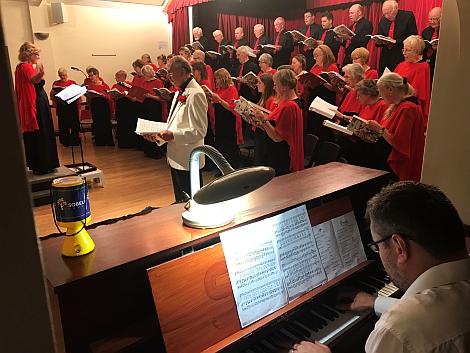