Thanks to the Keen Skydive Team

You are here: Home / Thanks to the Keen Skydive Team

Thanks to the Keen Skydive Team

We asked Rob to talk about the experience, and he said;

“When my wife, Sarah and I decided it was time to raise more money for Sobell we decided a Skydive was the thing to do. After failing to get any family members involved, I put the idea to a group of friends at the local social club, and the journey began.

“The group that did the skydive was a complete mix of friends, customers, and in one case a lady that nobody had met before, but heard that we were doing a skydive, and ‘always wanted to do that’. One lady got involved after her mother in law spent some time at Sobell, and like us, wanted to give something back. The day itself was amazing! The thirteen of us met at Hinton with a sense of trepidation, but once things got going the day ‘flew’ past, and the experience was incredible.

“While we were at Hinton doing the jump, Sarah Honey and her team of support workers did a fantastic job back at the club preparing the reception and raffle that also made a substantial amount.”

“My wife’s sister passed away in 2011 having suffered secondary brain tumour, and spent her last few weeks at Sobell. The support the family got while she was there was exemplary. All of the staff treated her and the family with dignity and respect. What we do is a small way of saying thank you.” 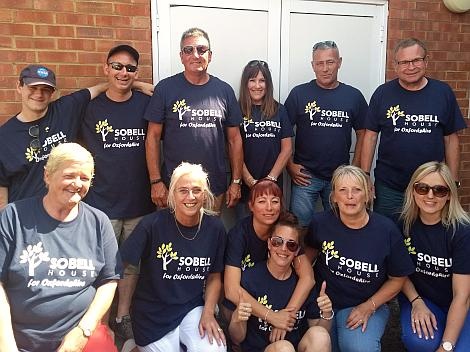