MENUMENU
0 Items
You are here: Home / Who We Are / Our Impact / Anny and Peter’s story

In September 2016, Anny was in good health and we’d just been with friends on a cycling holiday in Mallorca when she discovered a lump in her abdomen. She was diagnosed with a very rare tumour stemming from the appendix – known as pseudomyxoma peritonei – and underwent a massive 10-hour operation.

Anny fought bravely after the surgery but her weight plummeted. With no stomach and very restricted bowel she was unable to sustain herself by eating normally and she was saved by the parenteral nutrition team at Oxford who connected her to intravenous nutrition. This transformed her life. Her weight steadily increased, she would walk, do the gardening, cycle on her electric bike, actively participate in our son’s wedding and maintain her happy relationship with her grandchildren. Her life was tough but she could enjoy living once again.

Sadly, in August 2018 the dreaded pseudomyxoma returned with a vengeance. Further surgery was ruled out in favour of chemotherapy but she suffered badly with side effects for which she was admitted to hospital and chemotherapy had to be stopped.

At this stage we were introduced to the palliative care team at Sobell House who initially visited her at home, before offering a bed in the hospice to get her medication under control. It was her intention to return home after a few days, but she was so weak and the staff so lovely, that after much deliberation she felt happier to stay there for her end-of-life care. It was a realistic prognosis now that she only had weeks left to live. Anny had been so strong mentally to have fought so hard to overcome her condition following that drastic surgery in February 2017, but she now accepted that she could ﬁght no more. Her care was fantastic. We talked lots and took great comfort in all our wonderful years together, and having such great support from all our family and friends through such difﬁcult times.

Tom, the music therapist, was an inspiration to me. I had written a song when I was 19 about an imaginary lost love – ‘Gorgeous Girl’. I had written some extra words for Anny and for quite a while I had secretly planned to sing it at Anny’s funeral. I asked Tom if he would help me record it with a bit of extra accompaniment to go with my guitar. He was brilliant – I sang it through and he added his bits to give it a much richer backing. It was a diﬃcult moment when I told Anny I wanted to play the song at her funeral, but it meant so much to be able to play the CD to Anny in her room. We were both very emotional and crying our eyes out, but very rewarding as music is such a powerful way to express those deep thoughts of love and loss. The chorus goes, ‘Gorgeous Girl, I long for you … I love you, but you’ve gone’. 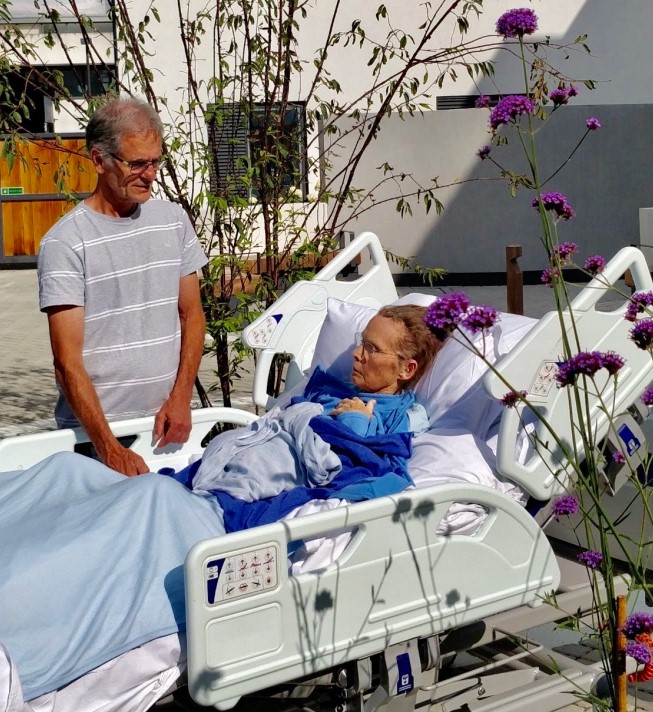 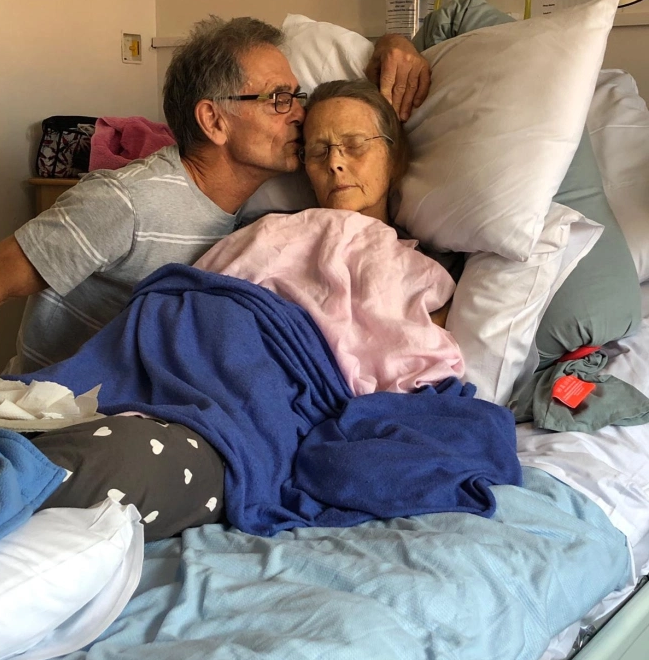 There were many beautiful mornings in Oxford in August 2019. Sobell has a calm and relaxing atmosphere in spite of the trauma behind the doors in so many lives. Anny had to move room at one point and we were struck by the comforting familiarity of a space at such a time when change could be quite disconcerting, but Anny took it in her stride and her new room, facing East, basked in the early morning sunshine. It is amazing how sunshine helps to lift the spirits.

I met some wonderful people at Sobell House, not only the staﬀ but also the relatives of loved ones there. I was touched by one particular family of four sisters, one of whom was riddled with cancer and so young at 44. Early one morning in a sunlit corner of the garden, wrapped up in their blankets enjoying their drinks, they told me light-heartedly they were imagining they were on holiday in Palm Springs! The discussion turned to those mixed emotions of wanting their sister to be released from her misery, but at the same time frightened of the inevitable and not wanting to lose her – exactly the position I felt. With Anny we had said our goodbyes, we had had those really hard moments facing up to and talking about the inevitability of her death. She was now barely conscious, but still I was frightened of that moment when she does actually go, and the reality of her just not being there.

Later that day they told me their sister had just passed away. They were crestfallen with grief – I hardly knew them, but going through that same journey myself I could really feel their pain. They knew this moment was coming, they were desperate for it to come but they were now so sad at the ﬁnality of its coming. 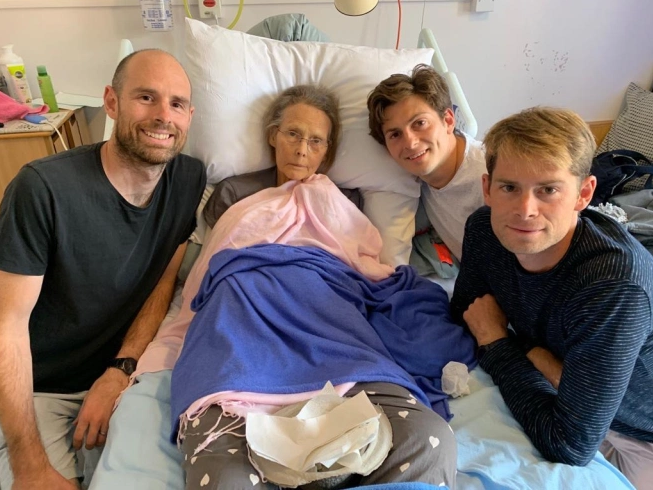 Pictured: Anny and her sons Richard, Tom and Simon

In the morning after a diﬃcult night, we were advised that Anny was now very close to the end of life, so we prepared to bunker down for the night, booking the relatives’ room. Thinking ahead that we’d need a bite to eat, Rich popped out to collect pizzas for us. Soon we were suddenly aware that Anny’s breathing had become noticeably slower. Simon timed the gap at 4 seconds, then 12 seconds and we realised this could easily be the moment. Tom quickly phoned Rich who by this time was at Mario’s collecting the pizzas! We sat there intently watching Anny’s chest rising and falling at increasingly longer intervals, until with no fanfare or ﬂourish her breath was no more. That was it – the moment of passing, no drama, she was gone. Rich fortunately was now back with us. We hugged, cried and quietly shared that memorable time together, with Anny just lying there, so peaceful and so beautiful. We kissed her, she was still warm to the touch, we still felt so close to her and yet she was also now so far away – she had gone. For us, this time together is a moment, and an experience we’ll remember vividly for ever.

And then the pizzas – Rich suggested getting the pizzas from the car. We tucked into them in Anny’s room number nine (our home for the last few weeks), now dominated by Anny’s powerful presence in her now somewhat ghostly but still lovely appearance. While it was all quite bizarre and seemed a bit irreverent for some reason, it actually seemed an entirely natural thing to do, to enjoy a last supper together with our dearly loved Anny / Mum.

Thank you so much to Peter for kindly sharing Anny’s and their family’s experience of Sobell House.