MENUMENU
0 Items
You are here: Home / Who We Are / Our Impact / Reg and Rachel’s story

I met Reg 28 years ago – Reg was a security guard and I was a cleaner and worked in a shop. We had a mutual friend and one day she said to me, ‘I know someone who fancies you!’. It turns out that while I was working in the shop, I’d actually served him. Reg asked me out and cooked me a meal – and since then, we were always together.

He was very social; he loved going down to the pub, watching the football and having a pint with his mates. But at heart, Reg was a family man – our daughter Autumn was his world; he loved family evenings, with a takeaway and games. This year would have been our 25th wedding anniversary.

But in 2019, Reg became really poorly. He was in the John Radcliffe Hospital for about five weeks when they told us his time was short. I remember a kind lady from Sobell House came and told us all about it. Reg was upset to hear he could be going into a hospice, but the lady was so lovely and tried to reassure us. The truth is, he was just too unwell to come home – there was no way I could give him the care he needed.

You know how you have an image in your head about what hospices are like? Sobell House was nothing like I thought it’d be. From when we walked through the doors, I knew that Sobell was light and love. Reg was there for five weeks initially and in that time, the nurses and staff were just amazing; they built up Reg’s strength, supported him emotionally – gave him a bit of confidence to do things for himself.

I’ll never forget the time I went to visit and he was in the bathroom shaving – ‘Hey, look!’ he’d said. It’d been such a long time since he’d done that on his own and he was so proud. Autumn and I spent every day with him.

Pictured: Reg with his daughter, Autumn, and wife, Rachel 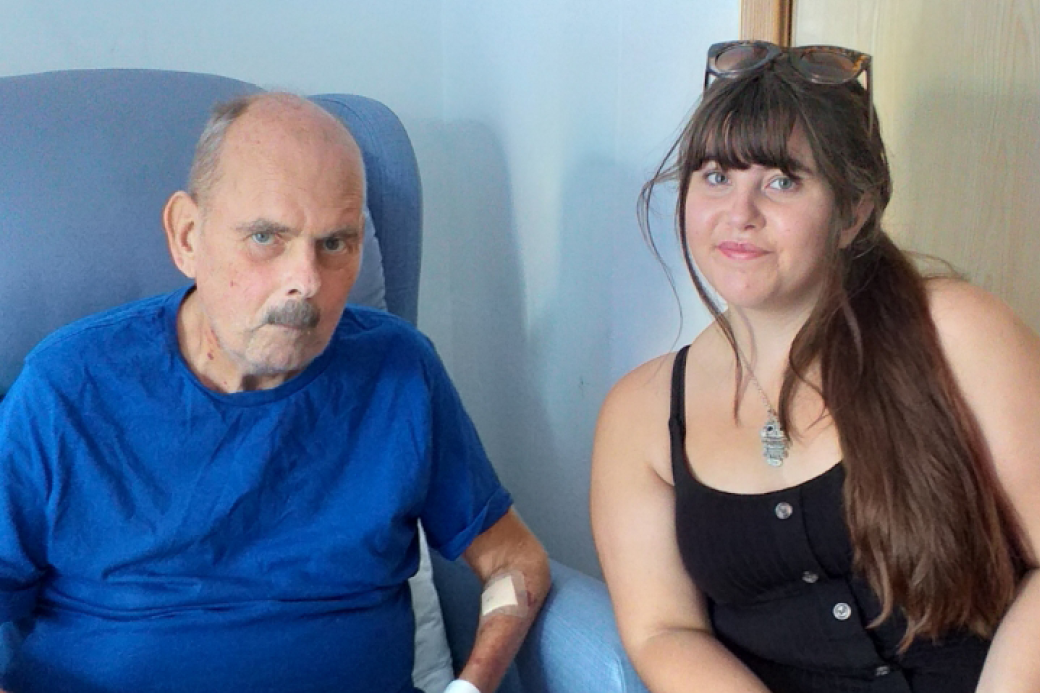 But we knew he wasn’t going to get better. After that initial time in March, right before lockdown, he went in again in August – and we noticed a big change with Covid-19. We couldn’t go into the day room for tea and coffee and sometimes, we’d have to ring up to check in with him. My heart does break for the people who couldn’t be with their loved ones last year. Autumn and I were very blessed to spend a lot of time with Reg before we lost him in October 2020.

Going to Sobell House was the best thing we could have done. It was like a home from home. Nothing was too much trouble for them – and we were so well looked after.

Thank you so much to Rachel for kindly sharing her husband’s and family’s experience of Sobell House.